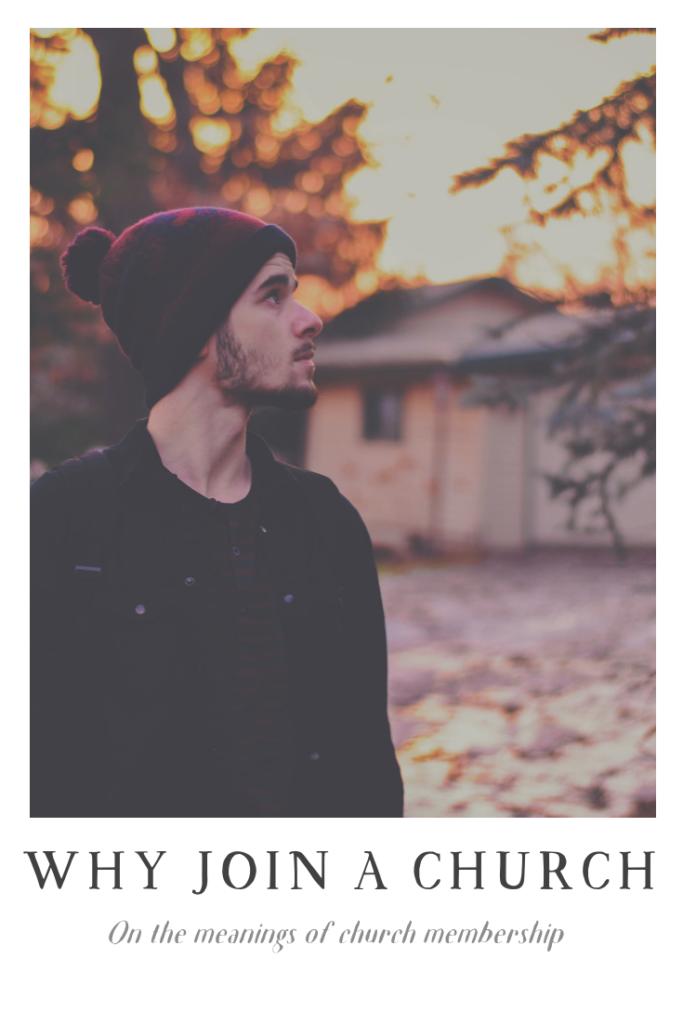 Nowhere in the Bible does it say that Christians have to be church members. Hebrews 10:24-25, verses that are often quoted in discussions of church attendance, does specifically tell us not to “[give] up meeting together, as some are in the habit of doing” (NIV). That is a clear direction to gather regularly with other believers, and that instruction is connected to encouragement in our walk with Christ: We meet so that we can “encourage each other toward love and good deeds.” The implication is that community is vital to living the Christian life. But good Christian community can and does take many forms. And if you’re looking for a “thou shalt join a local church” commandment, you won’t find one. Still, I’ve come to believe that there is something important to be said for church membership. I don’t think it’s just a holdover from generations ago. Instead, membership can be one human mechanism to spur us on to greater spiritual maturity.

My beliefs about this topic came out of my own transformative experience of membership. When I was in graduate school, I attended a small Baptist church in St. Louis, Missouri. It was a cozy community, welcoming to newcomers, and generous with love. Families invited me to holiday dinners when I couldn’t go home, and they even bought me groceries on a couple of occasions. Basically, they adopted me. I was a student far away from my family, and people in the church took it upon themselves to make sure I always felt like I had family close by. Almost 20 years later, I still have “St. Louis parents” whom I love dearly.

Although I was an adult when I started there, I felt like I grew up in that church, and one main reason for that was that I became an official member. Honestly, I didn’t want to do it at first. A few things kept me away.

One was that this was a Southern Baptist congregation, and I knew that Southern Baptists had a troubling history on issues of race & gender. I wanted to keep my distance from that history, even though I felt that I could embrace the people and most of the teachings of this local congregation. I consciously resisted becoming a member because I didn’t want that affiliation.

The second reason for not joining was that, on a really basic level, I saw no reason to do it: I mean, I went there nearly every Sunday, gave offerings, volunteered for things, and liked the people. I couldn’t see why having my name on the official church roll would make one bit of difference. Furthermore, I didn’t want to commit to a community because, knowing myself, I figured that I would feel guilty if I ever decided to leave. I wanted to keep my options open.

Soon enough, though, I was so involved, and so many people had mentioned membership to me, that I decided to go ahead and join, even though I still had reservations. Defining my relationship to that group of believers proved to be tremendously meaningful for me, and it taught me a few things that I believe are true for all of us who are interested in being part of a local Christian community.

Here are four things that I learned.

Making a public commitment can shift your mindset. I would guess that many of us find ourselves going to church as consumers and critics. We know our preferences for music, we know what kind of preaching we like. If a church isn’t giving us what we need or want, we don’t think twice about looking elsewhere. I was in a similar mindset, even though I was pretty involved in my church. After I became a member, though, I found myself thinking more like a contributor than a consumer. I wanted to use my talents to help make things work. I wanted to know what the needs were and to offer my input where it could be helpful. In other words, instead of just setting my preferences and following where they led me, I started to take more responsibility for my part in what was happening.

Belonging is more than just a feeling. It definitely feels good to be part of something that you think is good or successful. Most of us love being part of teams, and we like to declare our allegiances by wearing the t-shirts and sporting the bumper stickers. It also feels good to have a place where you can feel recognized, valuable, and cared for. But there’s another dimension to true belonging, and that’s responsibility. The places and groups to which we truly belong have claims on our time and energy. We have a role in making them good and successful. Membership made me “level up” my idea of belonging to my local church. I started to see that I couldn’t just sit back or float in and out anymore. I had a part to play in making it a place of effective ministry, a place that made other people feel like they belonged as well.

The church needs us. When we passively consume and/or actively criticize church instead of contributing our gifts and talents regularly, it is easy to forget that it takes people’s time and energy and money to minister effectively and make church happen. Somebody needs to work in the nursery, play the drums, greet the guests, and mow the lawn—every week. Somebody needs to organize the meal train, clean up after the baby shower, arrange hospital visits, and coordinate service projects. To make that happen, churches rely on people committed to serving. Yes, you can serve without being a member. Thousands of people do. But active members—people who have decided to commit to a community—often do most of that work. Many churches, even those with full pews, are starved for people with that kind of commitment. Membership, I believe, can help nudge us toward a different mindset about our service. Imagine what church could be if the people who sat in the pews every Sunday suddenly started to see themselves as contributing to God’s work in your congregation.

We need the church. The verses from Hebrews that I quoted at the beginning of this piece talk about meeting together to encourage each other. In times of crisis or loss, that need to be with other believers can be particularly acute. If you have ever felt supported by a church community in a situation like that, then you know how precious and life-giving that can be. In fact, that kind of support is another feature of true belonging. Can you have the same supportive belonging and relationship without church membership? Definitely. But I would suggest that when we enter into membership and follow through with the right mindset, we make it more possible to forge those kinds of sustaining connections. My mom put it to me this way: “when you belong to a body, people close ranks around you in times of difficulty, and if you’re going to want that support in times of difficulty, you need to be around in the regular times.” My mom was not suggesting that you cannot expect support unless you “pay up” in some form beforehand. I am not saying that either. I’m only pointing out that communal relationships that are nurtured and sustained by commitment can often be a source of strength in difficult times. This is true in many contexts. It’s especially true in church.

You can certainly be a Christ-following believer who is not a member of a church. And you can definitely serve God faithfully as well without making a public declaration of membership in a local congregation. But in a time and culture where genuine commitment and connection are harder to find, church membership might be one way for us to challenge ourselves to do our part to strengthen bonds and forge connections with one another. We would benefit from that individually, and so would the body of Christ. 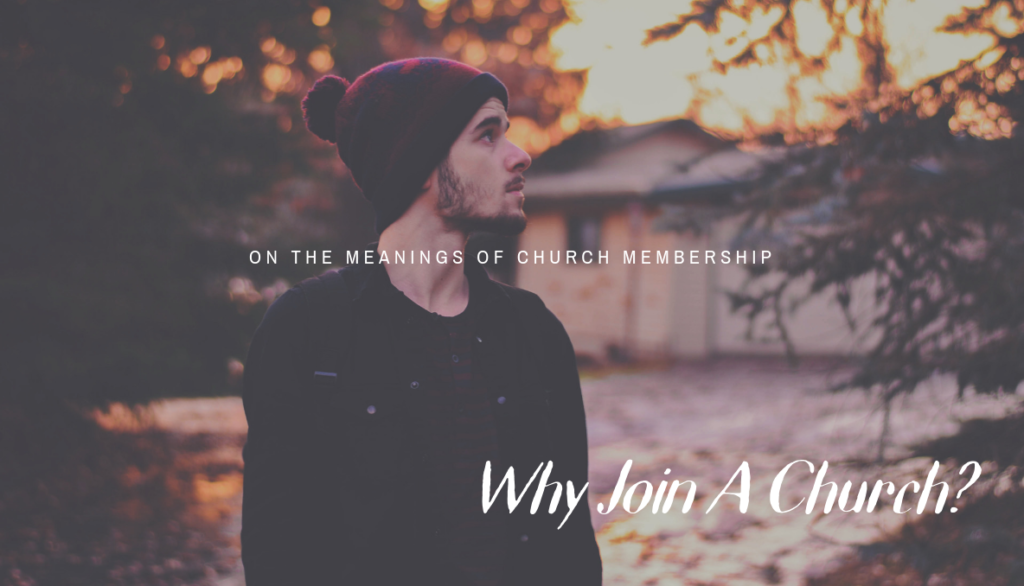 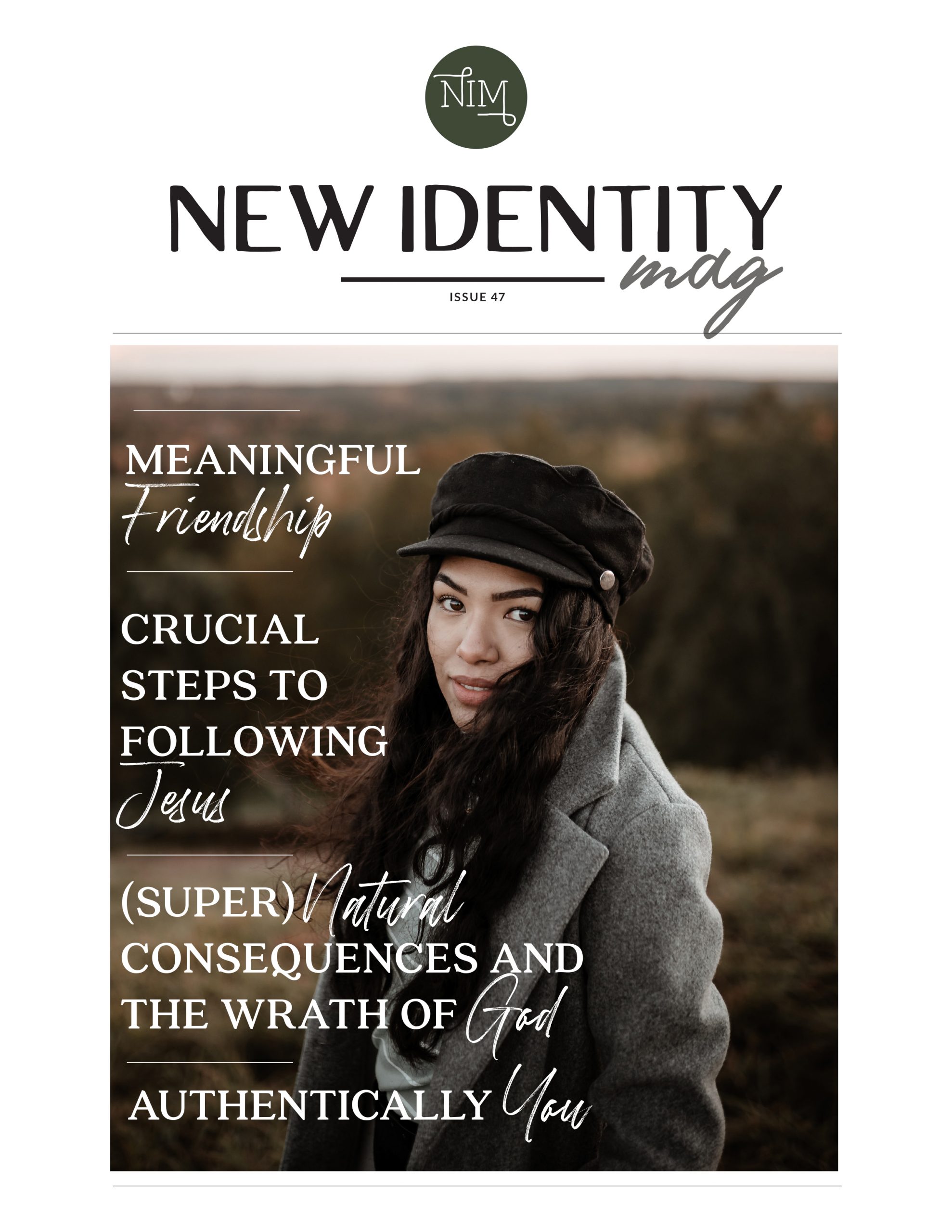 We hope you enjoy the new issue! Check out the lin

How should we be using our money? - We're looking

"Do your little bit of good where you are; it's th

The Bible tells us to live in the world, but not t

If you desire to serve, seek to form groups withou

"If we put our faith in temporal things, they will

"The presence of my sin reminds me of my great nee

"As Christians, we identify ourselves not only by

Often I picture Jesus telling us to love others an

Like Morpheus, I want to “show you how deep the

"I’ve always been intrigued by Augustine because

"The Holy Spirit empowers us for Christ-like livin

When my husband and I got married four years ago we discussed whether we ought to write our own wedding vows or use a more traditional format. Traditional wedding … END_OF_DOCUMENT_TOKEN_TO_BE_REPLACED

To some extent, Christian denominations can be seen as ways to 'do church' differently. Usually, what sets denominations apart is their take on certain biblical … END_OF_DOCUMENT_TOKEN_TO_BE_REPLACED

I once paid for gas with a counterfeit bill. At the time, I had no idea it was counterfeit. I thought the $20 I pulled from my purse was valid, perfectly real. … END_OF_DOCUMENT_TOKEN_TO_BE_REPLACED